The young wolves
are loose!

Development of a used car brand for the different locations of Volkswagen Automobile Frankfurt with the following objectives.

To attract maximum attention, we shot short mobile phone videos with real wolves at night at the VAF site with deliberately poor image quality to emphasize the authenticity. We then shared this video via a straw man on Facebook and the whole thing went viral.

In this step, we then spread the word through the client’s own social media channels that young wolves had been seen on the premises. Here, too, we achieved a high level of attention.

Phase 3: Viral launch of the official video on Facebook

With different videos that we shot with several wolves inside the customer’s used car center and on the grounds, we explained the background of the campaign. We explained the joke of “Young Wolves” as the used cars and highlighted their advantages. With these videos we achieved a gigantic organic range.

Parallel to the launch of the videos on Facebook, various advertising media were installed at the POS. As an eye-catcher from the outside, we hung XXL facade banner. In the interior we had different floor and window stickers, ceiling hangers with statements combining the characteristics of wolves with the respective vehicle models and classic end customer flyers with the advantages of the young wolves. In addition, all used cars were equipped with “young wolves” number plates. 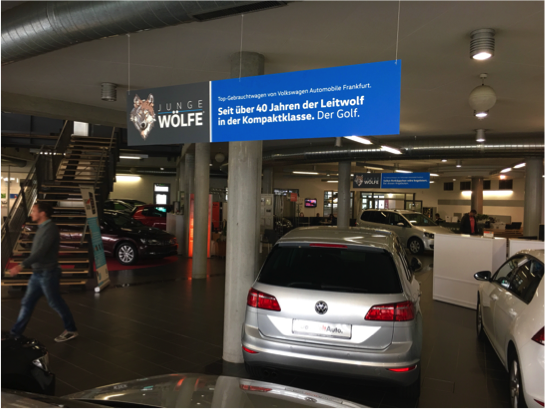 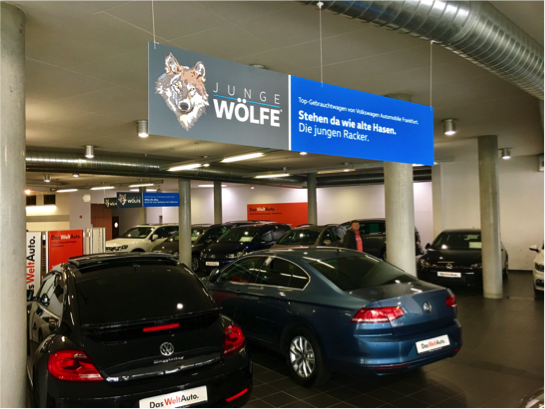 Free coverage in the local press with wide reach

Continuation of the used car branding until today